The truth is almost always shocking and so is Christos Tsiolkas’ ‘The Slap’. This book is very close to my heart for several reasons. It is the only book I know of that depicts modern Melbourne, its author is a friend of a friend (they were together at the University of Melbourne) and reading it helped my closest Milan friend to understand the world I come from and, as a consequence, me.

Christos Tsiolkas is a Melbourne writer of Greek descent. This helps explain his capacity to describe the multicultural nature of our city where Mediterranean and Asian influences seamlessly intermingle with its British and Irish beginnings.

Tsiolkas’ book is on the one hand easy to read, because it grabs you, hijacks your attention and emotional energy until you finish it; but on the other hand very hard to digest, because every page is confronting, like a punch in the guts, the language direct and brutal, the issues too close to the bone and the characters often unlikeable (some more than others). 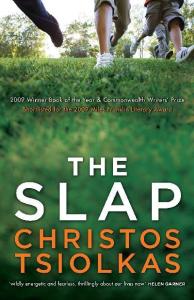 ‘The Slap’ hinges around an event at a barbeque in a typical suburban Melbourne backyard: a child gets slapped by an adult who is not his parent. What follows is a fast paced exploration of the diverse, yet interconnected topics that are of relevance in contemporary Melbourne society, and a virtuoso creation of eight different individuals that arise from Tsiolkas’ unique ability to put himself in another’s shoes and see things with their eyes. Each person (Hector, Anouk, Harry, Connie, Rosie, Manolis, Aisha and Richie) has a chapter devoted to him/her. The characters are drawn with strong colours and placed under a harsh light. Nothing is subtle about them, except for the quiet crescendo wave that runs through to the end of the book and finally whispers: This is you, this is us: ugly, broken and fallible, but life is here and now, to be loved and lived, this is it.

Sometimes the author seems to be talking to himself, like at the end of the ‘Anouk’ chapter: ‘The cursor was still blinking. “Well, fucking write then,” she said out loud. So she began to write.’ or in the Aisha one: ‘Love, at its core, was negotiation, the surrender of two individuals to the messy, the banal, domestic realities of sharing a life together.’ In the ‘Connie’ chapter he transforms the suburban into a thing of wonder: ‘The Athanasious had a huge double-storey house on the crest of the hill on Charles Street. They walked up the drive, which was steep and long, and the shoes pinched at Connie’s heels. Fairy lights decorated the verandah and music could be heard booming from the back of the house. The girls stopped at the front door and looked back at the city spread below. Melbourne was all lit up below them, and the night sky was a deep, satiny purple.’ and then does the same again in the ‘Aisha’ one: ‘She was, in fact, overwhelmed by what she was experiencing. The light from the sun seemed overpoweringly luminous. Queens Parade was drenched in supernatural brilliance.’

Tsiolkas manages to dwell with ruthless realism on all the subjects that make us feel uncomfortable: how we raise our kids, the private versus public school debate, race relations and social class, marriage and fidelity, family, friendship, youth, drugs, sexuality, manhood and fatherhood, abuse and ambition. The array is Shakespearean in its breadth.

Perhaps ‘The Slap’ falls short of being a masterwork and it is definitely not for the faint hearted, but it reflects a young nation’s yearning to find its identity. As a Melbournian, it fills my deeply felt need to be defined and acknowledged in a world that is largely indifferent to our far away land (what Geoffrey Blainey called ‘The Tyranny of Distance’). In this sense, ‘The Slap’ fully succeeds – it shouts out loudly: this is Australia!